When two people are together, differing opinions occasionally arise. It's just normal and probably a good thing.  Jerry keeps me balanced by looking at all sides of things instead of just my opinion.

In the Old Testament, the Israelite leaders inquired of the Lord before entering battles to see whether they were supposed to fight. Sometimes they were told to move forward and other times, they knew they were not to fight.  If only we could take a step back and pray before entering into a verbal battle with our spouse we would be better off.

In 1 Samuel 23,  after winning a battle God ordained, David heard Saul was in pursuit of him.  Instead of attacking Saul, David fled.  He recognized King Saul as an authority figure, and knew he must honor Saul’s position and was not ever supposed to battle him.

In our marriages, we are to join together against outside forces and things that seek to divide us – and not against each other.   When we fight battles we are not supposed to be engaged in, we inflict wounds that God never intended for us to have.

Satan recognizes the unity we have together as couples, and he will go to great lengths to bring division in marriages.   Let's not wound each other.  Instead,  let us be wise to Satan’s schemes, bite our tongues and not say things to each other we might later regret.

Learn to hear your spouse out, even if you don't think you will fully agree with what he or she has to say.  At least you can acknowledge his or her opinion as valid.

If a solution can't be reached, it's important to let it go for a while, both of you pray about it and discuss it again later.  The key to finding the right solution is being willing for God to change your mind - and you in the process.
Posted by Debbie Gray at 10:56 AM No comments:

Happy Anniversary to my Great Husband!

Jerry and I have been married for 37 years this coming Wednesday, May 21st.  There are days it seems we have always been together and also times we wonder where the time went.

Our kids are all grown and we have been empty-nesters for seven years now.  Because we maintained our relationship, it has been a good transition for us.

During the child-rearing years, it is so easy to focus on the kids and not take time out as a couple.  We went through that phase too.  We learned the hard way we had to stay connected and nurture each other every day.  Waiting till the kids were grown was not an option.

Because we cultivated our relationship, I am now more in love with Jerry than ever before.  Jerry is easy to love though.  Let me brag on him a little.

He is an encourager.   Jerry supports whatever I do – and believe me, I’ve done many things – some of which I didn’t stick with.

Jerry is a great father to our three sons.   While they were growing up, he was always there to encourage them to go for their dreams. The memory of him praying on his knees by their bedsides in the middle of the night is etched in my mind.  They are all successful adults today, and I believe Jerry’s influence made a huge difference.

Jerry has a generous heart.  He doesn’t consider himself but gives whenever God prompts him to give – money or time.  He also gives to me.  He encourages me to spend money on myself.  On the flipside, I don’t take advantage of his bigheartedness.

Jerry spoils me on the weekends, often cooking for me or taking me out.  He makes sure I have fresh flowers on the table all the time.

Jerry is a hard worker.  Everywhere he has ever worked, he treats like his own business by giving 100%.  I know he gets tired.  His schedule is a tough one, but he just keeps on going day in and day out to provide for us, not complaining about how weary I know he really is.

Jerry is a great listener.  He recognizes my need to connect with conversation.  I’m sure after talking all day, it would be easier to veg in front of the television but he makes time to talk with me instead.  Yes, we do watch some television but it’s not the priority.

Despite Jerry’s grueling work schedule, he still manages to spend time in the presence of the Lord, even though he has to get up at 4:00 am to do so.  He is a good example to me.  If he can get up that early, I have no excuse for missing my time alone with God.   He covers our home with prayer and that makes me feel secure.

He has men he is accountable to – even though the only time they can get together is by telephone at 5:30 am weekly.  He also has invested in many young men throughout the years who are now great husbands, fathers and spiritual leaders themselves.

Jerry Gray is the love of my life, and I am so grateful to God for blessing me with him.

The Bible says in Proverbs 27:17, “As iron sharpens iron, so one person sharpens another.”  I hope the things I shared about Jerry will challenge you to become a sharper person.

Posted by Debbie Gray at 4:52 PM No comments:

Make Allowance for Each Other's Faults

Ephesians 4:2-3 (Living Bible)
Be humble and gentle. Be patient with each other, making allowance for each other’s faults because of your love. 3 Try always to be led along together by the Holy Spirit and so be at peace with one another.

The Bible is the best place I know to get advice on how to have a great marriage.  There are some specific verses that deal with marriage and many more deal with every day relationships.

In Ephesians 4, we are encouraged to be patient with each other and make allowances for each other’s faults.  That’s easier said than done!

Verse 3 gives us the answer to walk it out:  “Try always to be led along together by the Holy Spirit.”

When I make time to spend in the presence of God, I am more pleasant to be around.  I can always tell when I've skipped a few days because it affects the way I think which in turn affects the way I speak and act.

When Jerry and me both have our daily time with God, we are more at peace with each other and everything else going on around us as well.  It is being “rooted and grounded in His love” that enables us to stand firm against the stresses of our lives and walk together in unity.

It may be a challenge to carve out time in your busy household, but believe me, what you gain in peace makes it worth it.

Posted by Debbie Gray at 3:47 PM No comments: 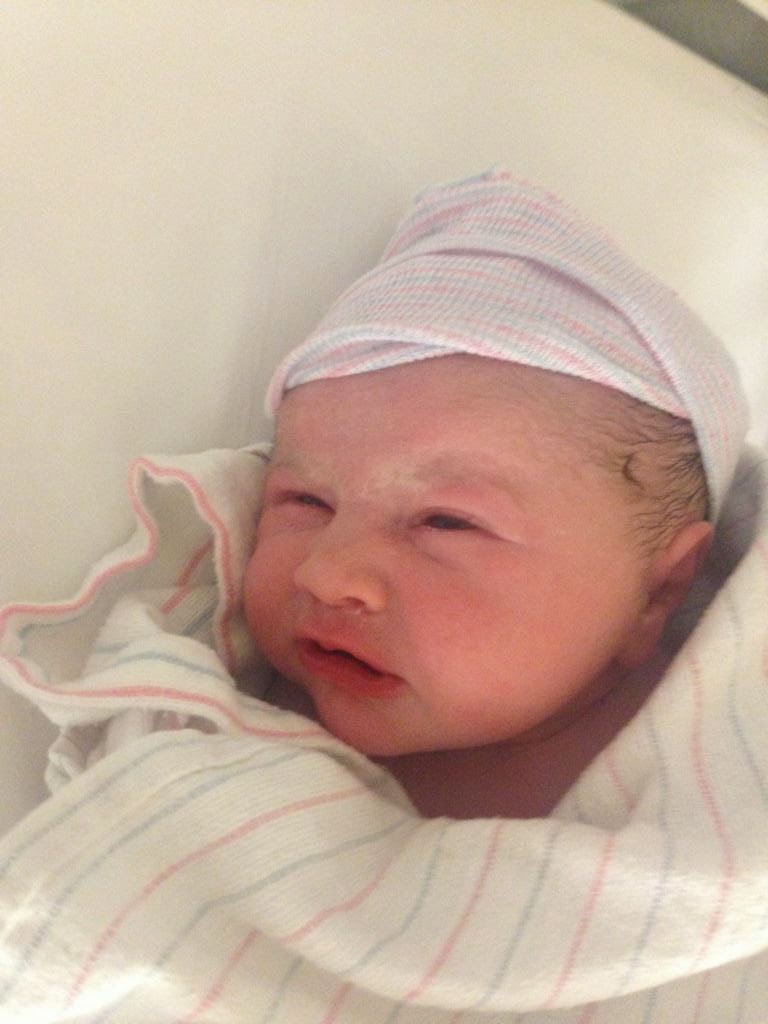 This past week our oldest son, Erik, and daughter-in-law, Lauren, had a baby (our first grandchild).   It flooded me with memories of when Erik was born himself.

I never knew a baby could require so much time and attention.   We were so blessed to have Erik (and his two brothers later on), and we loved every minute.  However, the amount of focus needed was a surprise.

There will be many seasons in marriage.  Life with a newborn is a season when each marriage partner must give the other more grace than normal.

For one, when we are physically and mentally exhausted it is easy to become impatient with each other and say things we don’t really mean.

In 1 Kings 19 is the story of Elijah after a huge spiritual victory.  I won’t go into the details here, but you can read about it in 1 Kings 18.  Elijah was physically and spiritually exhausted.  He told the Lord he had had enough and prayed God would take his life.  Instead Elijah slept and God sent an angel to feed him and give him water to drink.  Then he put him back to sleep and woke him up again for more food and water.

You may not have a new baby, but maybe your life is just full of extra challenges right now.  You wonder how in the world you can even think about carving out extra time to sleep or do anything to take care of yourself.

In observing many couples throughout the years, I have learned, we can push ourselves for a while, but we must not allow that to become a lifestyle.  It will come back to bite us.  Even this week a friend of mine was sick because she went too many nights with only a few hours sleep due to a project she was working on.

My wise daughter-in-law is learning to sleep when the baby sleeps.  We, in our own season, must learn to implement whatever solution we can come up with to remedy our own challenging schedule.

When traveling by plane, the airline attendants say, “If the cabin pressure drops, an oxygen mask will come down.  Put it on you first and then on your child.”

The reality is, it is necessary to take care of ourselves so we can do all the things required of us as moms, dads or spouses.  Is it easy to do?  No.  Sometimes it takes a lot of creativity to carve out even a little time.

In addition to sleep, eating properly and drinking enough water, figure out what it is that brings you joy.  Some people like shopping, exercising or reading.  Others just love sitting at Starbucks and having a cup of coffee.  Whatever it is that refreshes you, I encourage you this week to escape for even a few minutes to become refreshed.

You will be amazed how taking even a little time for yourself can actually connect you with your spouse and give you more energy to pour into each other and the family.

Posted by Debbie Gray at 3:16 PM No comments:

Jerry and Debbie Gray live in Gilbert, AZ, and have been married for 43 years. They have three grown sons. Now they have two daughter-in-laws and one granddaughter and one grandson.
Jerry and Debbie have a passion to see marriages thrive. Many years ago, God restored their marriage after a year and a half separation. They want to share lessons they learned the hard way to prevent others from making the same mistakes.
Jerry and Debbie are licensed pastors and have worked with engaged and married couples for a number of years. Their focus is marriage preparation and marriage tuneups. They see many couples from their own church, 29:11 Church in Tempe. However, they also see others in the community and across the country by Zoom.
Jerry is also a Registered Dental Hygienist, and Debbie is a Wellness Advocate with doTERRA (mydoterra.com/debbiegray).
Debbie also has another blog, grayciousliving.com.